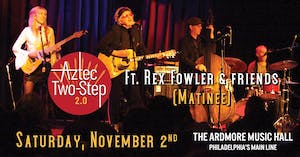 Rex Fowler & Neal Shulman, as Aztec Two-Step, burst on the scene with their Elektra debut in 1972. Following up with three releases on RCA, the duo quickly became staples of progressive FM and college radio. They went on to spend a lifetime of making music together. After 47 years of recording and non-stop touring, Neal retired in 2018, with lead singer and songwriter Rex carrying Aztec Two-Step forward into a new era. Continuing on with their renowned and well-loved catalog (including some of Neal's originals), Rex has expanded the band's musical legacy with his new ensemble. With 2 and 3-part harmonies, multi-instrumental arrangements, and Dodie Pettit’s electrifying guitar work, they recapture the sound of the original ATS studio recordings - fresh, yet familiar. Rex’s Aztec Two-Step 2.0 embraces the fan favorites and forgotten gems, with the stage patter still as engaging, funny and poignant as ever.

What people are saying about ATS 2.0:

"I went to the show this past Saturday night. Wasn't sure what to expect. How do you replace Neal's guitar work? What a pleasant surprise!! Rex was Rex and the band was awesome!....Don't miss the opportunity to see them!" "Absolutely FANTASTIC show last night. All familiar material, just taken up a notch!! Really, really terrific show! Great job Rex and company!!" "Dodie is a Guitar Wizard!" “What a wonderful show! Exceeded all my expectations. Just magical!”