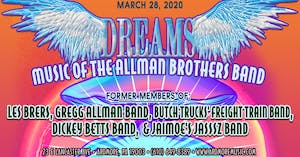 Tad Isch was second drummer in the Freight Train Band recruited from a Mid Atlantic Band by Butch Trucks ..

Junior Mack and David Stoltz are currently with Jaimoes Jasssz Band and Dreams Band along with many other projects.

Lamar Williams Jr. is currently touring the world with his new band Master Sounds, and various projects. When his dates allow he will be with us ! Lamars Daddy was the Bass player after Berry Oakley Sr. passed.