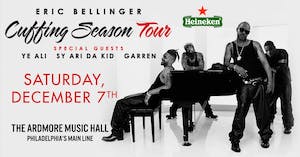 Considering his roots and upbringing, it is no wonder that Eric Bellinger has become an R&B sensation. An LA native and grandson of Jackson 5 hit songwriter, Bobby Day, Bellinger has been engulfed with music his entire life. His love for music drove his decision to turn down a football scholarship at USC to pursue his real passion.

Bellinger began his musical journey recording and touring with the R&B group, AKNU (A Kind Never Understood) and soon signed to Epic Records by legendary executives, Max Gousse and Tommy Motola. His natural talent for songwriting became apparent and he returned home to hone his abilities under the guidance of his childhood friend and mentor, Erika Nuri of “The Writing Camp.”

In the midst of writing smash hits for other artists, Bellinger continued to create exciting music for his loyal fans, releasing multiple mixtapes; ‘Born to Sing Vol 1-3’ (Which reached #3 on iTunes) ‘The ReBirth’ (A 32 track Double Disc) ‘Choose Up Season’ (The prelude/setup) for ‘Cuffing Season parts 1 & 2’ & most recently ‘Eventually’ (12 original songs with no features).

Though many would expect that the success of Bellinger’s project would be his inspiration to keep going, it is actually not the main reason. His fans and family are. Through all his growth, Bellinger’s family has had his back and his fans have been by his side through every step of his journey. A journey that has inspired so many others. With an independency that some may struggle to obtain, Bellinger is successfully breaking the ceiling. And that type of dedication, talent and determination can’t be taught. He just got it.

Bellinger is set to release his upcoming album titled Eazy Call at the top of the year. Eazy Call has several new surprises for his Eazy fanbase and is guaranteed to excite the market! Eric is also conducting a Malibu Nights tour, focusing on pushing his “Eric B. for President” 4 part series. It includes 2 eight track EP’s, Term 1 & Term 2 (available in acoustic versions). Make sure to grab your tickets for Bellinger’s show coming to a city near you! And while you’re at it, make sure you grab some Malibu Nights merch so you can rock to Eric’s next show!

P.S.: Not only will you be seeing Eric Bellinger’s names on songs next year but also on the big screen! Stay tuned, folks!