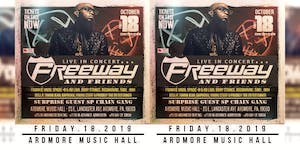 It starts with the voice. A combustible mix of hunger, ferocity, unvarnished honesty and brazen cockiness. Since his days as a kid battle rapping on the streets of his native North Philadelphia, Leslie “Freeway” Pridgen has always stood out amongst his peers, with every throat-grabbing tone and verse sounding like his last will and testament. It’s the reason why genre-defining hip-hop mogul and otherworldly Brooklyn emcee JAY-Z first recruited the two-fisted rhyme pugilist for his 2000 The Dynasty: Roc La Familia. With his fitted Philadelphia 76ers cap and signature Sunnah beard, Freeway, a practicing Muslim, presented himself as a sneering yet complex figure on his song-stealing debut on Hov’s classic ‘hood survival testimony “1-900-Hustler.”

“First thing first, watch what you say out your mouth when you talkin’ on the phone with hustlers/Never play the house, think drought, keep heat in the couch when you sitting in the presence of customers!” he proclaimed with all the subtlety of a sledge hammer. A bruising star was born.

“That verse took my dreams to a reality,” recalls a still blown away Freeway, who at the time was a little known member of buzz-heavy Philly spitter Beanie Sigel’s crew. He would go on to drop his critically acclaimed gold-selling debut album Philadelphia Freeway (2003). “I was already around the music industry and in the mix with Beans when he was recording The Reason while JAY was working on the Dynasty project,” Freeway continues. “I just felt like if I could get a fair shot, I could make it happen. With ‘1-900-Hustler’ I knew I had finally arrived.”

With the much-trumpeted Roc Nation release of his sixth studio set Think Free (June 8th), a revitalized Freeway solidifies his storied legacy. “There’s double entendre meaning behind the album title,” he explains. “If you want to be free, which most of us have an illusion of being free from oppression, you have to think free. And then of course, I want the listener to think FREE…to think about me and the music.”

On Think Free’s swaggering first single “All The Way Live” (produced by Philly’s own Biz & EST.), the grizzled vet shows himself to be in fine lyrical form over a Trap-infused banger. “Had to school a lot of young ones/Boy, I raised a lot of hustlers/In the ghetto where they cutthroat/Dust smoke turn to gun smoke/Fly by on that wide-body/Shit look like a tugboat!” Freeway proclaims. The S. Frank-laced “The Nation,” featuring legendary ‘hood wordsmith Jadakiss, is the type of event-worthy dream collaboration that is destined to become a fan favorite.

But it’s the deeply personal “All Falls” that truly hits home. On the DJ Skizz-produced track, Freeway opens up about his life threatening battles with kidney disease. “I’ve been going through a lot with health issues…with kidney failure,” says the usually private Free, who has completely changed his diet and does dialysis three times a week. “‘All Falls’ is a heartfelt record that addresses how some people disappeared from my life when things were getting dark for me and how I was able to fight through. I’ve lost a lot a weight. I look and feel healthier.”

Yet Freeway’s return back to the glaring spotlight almost didn’t happen. Following his successful stint with JAY-Z’s formerly-known-as Roc-A-Fella Records, the rapper had spiritual crises that saw him nearly walk away from the hip-hop game altogether. “There are religious scholars who believe we as Muslims should stay away from music,” he says. “I was being told that it was taking away my remembrance of Allah. But we are all sinners, so what I try to do is be the best person that I can be. I pray five times a day and I try to give back as much as I can. Musically, I try to also put something positive out there for the people.”

For Freeway, Think Free is a powerful full-circle statement. The one-time member of Sigel’s heralded State Property rap collective has reunited with Roc Nation honcho Shawn Carter for a joint venture with the Philly lyricist’s New Rothchilds imprint. But the genesis of the Think Free project goes back to April of 2015 during JAY’s all-star B-Sides concert in New York City.

“I originally talked to him about the project that night, but I was still under contract with an independent label,” Freeway says. “Even when I away from the Roc we still kept in touch because that’s my big brother.” A year later, an impromptu meeting between the two old friends during a massive stadium gig by global music icon Beyoncé took place. Impressed by Free’s ambitious vision and strong cache of songs, a deal with JAY’s Roc Nation was inked, giving the rapper much-coveted ownership of his masters.

It has indeed been a long, arduous, and extraordinary journey for Freeway. As a kid growing up in North Philly, the streets came close to turning him into another statistic. But hip-hop would prove to be a much needed refuge. Rhyme contests at the high school lunchroom became the norm. By the late ‘90s, Freeway was battling some of the best underground emcees on Philadelphia street corners and summer basketball leagues.

“We would be at spots like 52nd and Parkside,” Free remembers fondly. “All the ballers would shoot hoops while we would be rap battling on the side. I always knew I wanted to be an emcee, especially when I saw other people from Philly make it like Beans, Major Figgas, and Eve. When I witnessed people that I could actually touch get major record deals that made me feel even more confident about rapping.”

Soon Freeway’s reputation as a hard-charging, lyrical beast was evident to anyone listening. He conspicuously blasted off Beanie Sigel’s hit 2002 soundtrack single “Roc the Mic” for the cult classic crime drama State Property. But that was just a warning shot for his debut 2003 Just Blaze-produced hustler’s anthem “What We Do,” featuring JAY-Z and Sigel. The unpretentious Freeway was now a headliner. “There will always be people trying to get a dollar to take care of their family and just survive,” he says of the powerful song that to this day remains a favorite concert staple. “That’s why ‘What We Do’ transcends generations.” And that’s why Freeway continues to deliver his brand of no-nonsense, street-fueled poetry. It’s not always pretty…but it’s the truth.

“It’s incredible,” he says of his improbable run punctuated by Think Free. “I remember vividly when no one even cared about anything that came out of my mouth. So for people to still love my music the way that they do…that’s a true blessing.”