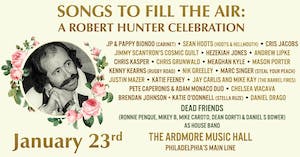 Songs To Fill The Air: A Robert Hunter Celebration

iCal
Google
A celebration of the late, great Robert Hunter - lyricist for The Grateful Dead and many others. Seated + table options available!

Once called by the Grateful Dead “the band member that doesn’t come onstage with us” Robert Hunter is known as one of the most important and prolific lyricists in Americana. Born in Arroyo Grande, California he became part of the burgeoning Bohemian scene of Palo Alto in the early 1960′s playing mandolin and upright bass in various bands with his friend Jerry Garcia.

His songwriting partnership with Garcia solidified in 1969 when they began to compose songs that would become classics in the Grateful Dead’s repetoire such as “Uncle John’s Band,” “Cumberland Blues,” “Casey Jones,” “Friend of the Devil,” and “Ripple.”

In recent years Hunter’s work has included collaborations with Bruce Hornsby, the band Little Feat, and David Nelson of the New Riders of the Purple Sage. Hunter has also collaborated on several albums with Nashville artist Jim Lauderdale.

He continued to work with former members of the Grateful Dead in different forms most recently including Bill Krutzmann’s band Seven Walkers and Mickey Heart’s various projects.

Hunter collaborated with Bob Dylan on his 2009 album Together Through Life and the song Duquesne Whistle from the 2012 album Tempest. As Dylan explained in an interview with Rolling Stone “Hunter is an old buddy, we could probably write a hundred songs together if we thought it was important or the right reasons were there. . . He’s got a way with words and I do too. We both write a different type of song than what passes today for songwriting.”