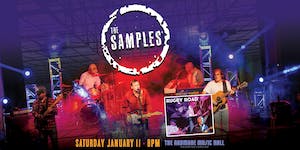 Best known for his high voice, unique guitar playing and songwriting (“Nature”, “Feel Us Shaking”, “Did You Ever Look So Nice”) rock, reggae and folk singer/songwriter Sean Kelly front man for The samples was born February 7, 1965 in Norwalk, Connecticut. The son of a WW2 veteran and a mom who worked construction to put food on the table, Kelly grew up in Vermont. While attending only one year of high school, he began playing guitar and composing his own songs. After moving to Colorado in 1987 to start a band, Kelly became a fixture on local club stages as the front man for The Samples, playing original songs with a variety of rock, reggae and folk. When not touring with The Samples, he enjoys playing his songs acoustically. The Samples are currently recording their 20th album, Indian Summer, to be released later this year. Kelly’s songs have been featured in Perks of Being a Wallflower and more recently in television’s Younger and in ads for MSNBC’s midterm election coverage.

Tickets available for The Samples on January 11th, 2020 at The Ardmore Music Hall!

2015 marks the 25th anniversary of Rugby Road playing together. The band members Kenny Kearns (Piano and Vocals); Derek Smith (Guitar and Vocals) and Rich Pruett (Drums and Vocals) relentlessly toured the region in the late ‘90’s through ‘00’s, honing their skills while blending rock, soul, funk, and jazz into a sound all their own.

While the band wasn't designed as a "jam band", the improvisational element found in their sound quickly became noticed by the Wetlands movement in New York City, where the band worked their way into the budding scene’s regular rotation.

Over the years, Rugby Road has shared the stage with some of their musical heroes, including The Allman Brothers Band, Phish, Bill Kreutzman of the Grateful Dead, Peter Frampton, Rusted Root, The Dirty Dozen Brass Band, Eric Bazilian and more.

Rugby Road has released 2 original records (available on itunes and amazon) "Times Already Happened" and "Different Degrees". "Times" showcases the bands improvisational freedom and captures the bands early catalog of original material that evolved along with their touring schedule. "Different Degrees" finds the band a bit more grown up and willing to stretch their songwriting and production capabilities into a more consistent studio record.

Rugby Road continues to gig on occasion and is still writing and recording original music.